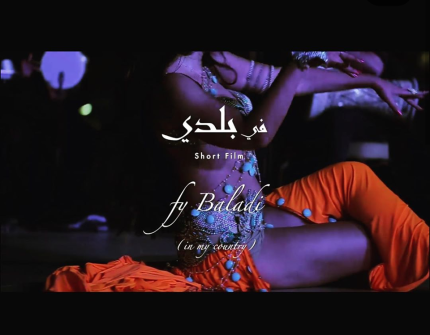 As an Egyptian, filmmaker Mariam Nader felt the need to do something to rescue the original art of oriental dance. The answer to this concern was “Fi Baladi”, a short film in which two iconic Egyptian dancers, Nagwa Fouad and Dina, gave their opinion about the decay of this dance. The short film includes some dance scenes by Amie Sultan, a contemporary Egyptian dancer who left ballet to devote herself fully to oriental dance. 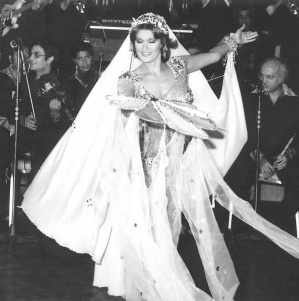 Nagwa Fouad, who was born in 1939 of an Egyptian father and a Palestinian mother, was one of the most recognized Egyptian dancers and actresses.

From 1957 to 1994 she participated in more than 80 films such as Touha, Sharia the Hob, Las Orientales, Nemar the Talamzah and The Mushajibun and, more recently, in two television series: Le Ala Ser and Ard al Neqaf. In 1976 the famous Egyptian musician Mohamed Abdel Wahab composed a piece of music especially for her show: Qamar Arbatashar.

During her career, characterized by her innovations in dance, she danced for personalities such as the former US Secretary of State, Henry Kissinger. In the 70s her fame was such that journalist Thomas W. Lippman wrote an article about her in the Washington Post:
https://www.washingtonpost.com/archive/lifestyle/1977/11/04/the-queen-of-the-belly-dance/fae93bda-9417-4e48-a2ee-be72714e0ce9/?utm_term=.0136f9408d76 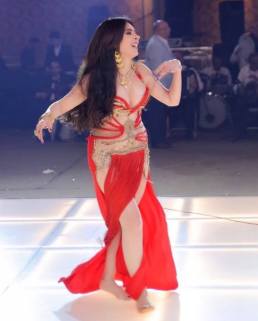 Dina Talaat has remained the undisputed queen of oriental dance in Egypt since the 80s and until now. She started hes career in the folk dance group Reda Troupe. Unlike other dancers who did not go to university, Dina has a master’s degree in philosophy from Ain Shams University.

In 2011 he published an autobiography entitled “Huriati fi al Raqs” (My freedom to dance). In 1998 Newsweek magazine called her “the last Egyptian belly dancer” https://www.newsweek.com/saudis-and-last-egyptian-belly-dancer-89525

She has participated in several films such as The Kammasha, Party fi harty and Abdo Mota and television series such as Rodda Qalbi, Raya wa Sekina and Nasr al Said. In addition, 30 years after starting her career as a dancer, she continues to give seminars around the world and participating as the star teacher in the prestigious international oriental dance festival Ahlan Wa Sahlan in Cairo.

In 2014 she organized a television contest “Al Rakesa The Belly Dancer”, which served as a platform for foreign dancers like Alla Kushnir (Ukraine), Oxana Bazaeva (Russia) and Brenda (Argentina) to achieve fame in Egypt.

What was your motivation to make this short film?

My motivation was to enhance the original art of belly dance as it has mostly turned into strip dance nowadays, especially in Egypt and people started to degrade it although it was such a respected art before.

Where did you study film making?

I studied film making basics at the German university in Cairo, applied arts media department, in additon to self studies on YouTube.

What is your nationality and have you belly danced yourself?

I am Egyptian and yes for sure I have danced myself as I love this kind of dance and it’s popular in Egypt so most ladies in Egypt have experienced this dance.

What is your personal opinion about Egypt’s frowning upon belly dance?

I think Egypt should care more about belly dancing schools as there are no professional schools here in Egypt to teach it professionally in order to encourage Egyptian ladies to get back on theater, getting back the original artistic moves, music and art.

It is not easy at all to do so but I wish and I think many other people wish to see and watch the original belly dance again without any vulgar moves or costumes.

* Giselle Rodríguez is the author of the book Oriental Dance in Egypt, a 38,000 word journalistic investigation into the history of belly dance, on sale through Facebook https://www.facebook.com/DanzaOrientalenEgipto/